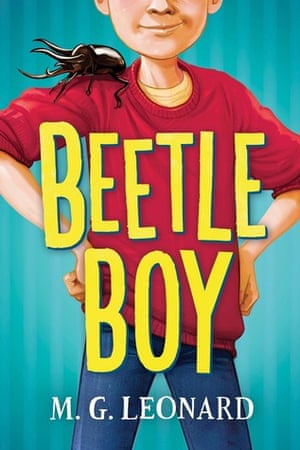 Darkus Cuttle’s dad works at the Natural History Museum in London. One day his father goes into a research room and disappears. The room was locked from the inside and there were no windows. The police are baffled. While authorities try to find his father, Darkus goes to live with his eccentric archaeologist Uncle Max.

His uncle’s next door neighbors Humphrey and Pickering are loud, mean and creepy. Their back yard is a maze of junk and Humphrey’s bedroom is full of unusually large and intelligent beetles. Darkus finds one of the beetles outside and befriends it. In reality, the Rhinocerous beetle befriends Darkus. With the help of his new remarkable pet Baxter and two school friends, Darkus discovers the secret to his missing dad might be connected to those beetles. It seems his father once worked on a secret genetic modification project with another scientist, Lucretia Cutter. She is now a fashion icon, and for some reason, she’s desperate to get those beetles in Humphrey’s room.

I really enjoyed this mystery/adventure with its quirky characters and beetle mania. This story makes beetles seem so fascinating and cool that I want one for a pet too. I especially loved the scientific descriptions and names of all the different kinds of beetles. This is one of the best examples I’ve read of seamlessly blending science into fiction narrative. BEETLE BOY is a great mystery too with a fantastic final buggy battle scene. I can’t wait for the next one in this trilogy. Highly recommended for ages 9 and up. I also think it would make a great addition to a classroom library.

Don’t miss out on great content from the Mafia! Have agency news, author interviews, book reviews, etc. delivered straight to your In-Box by entering your email address in the Subscribe Form at the top/right of the page.