Just released, Planet Omar: Accidental Trouble Magnet is the first graphic novel with a Muslim main character. The story captures Omar’s zanny imagination and the funny family dynamics that everyone can relate to. We talked with author Zanib Mian about her unique concept and what inspired her to create it.

Middle Grade Mojo: Beyond the description of children ages 8 to 12, who do you hope reads Planet Omar: Accidental Trouble Magnet? And, what would you like readers to take away from the story?

Zanib: I hope that Muslim children read Planet Omar and feel empowered by finally seeing themselves as the hero in a book, and that readers of other faiths can learn something about Muslim families. Perhaps the book may answer questions that readers were too afraid to ask a Muslim.

I’d like readers to take away a message of hope – that kindness and love is more powerful than hate. I want my readers to learn from Omar’s experience, that if you feel different, being unselfconsciously yourself, while respecting others, is the best way to form bridges.

MGM: The book includes many references to the Muslim religion and its traditions. How did you balance this with the details of the plot?

Zanib: I wanted to include religious references in the book, so that readers could learn about the practices that Muslim families hold dear. I felt the best way to do this would be for Omar to make natural references, in the same light-hearted and humorous tone that he narrates the rest of the book in. He explains things like prayer and fasting to the reader, in the same way that any Muslim child would talk to his friends about them. It’s part of his life, like his imagination and video games!

MGM: I can see kids of Muslim faith laughing hysterically at the everyday family interactions and mishaps. Are you afraid some of the jokes might be lost on those not familiar with the religion? 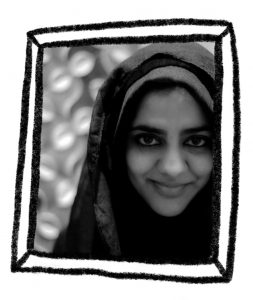 Zanib: I’m not worried about that, because the jokes referencing religion often play on the hilarious misconceptions that people might have of Muslims, like women wearing the headscarf at home, twenty four hours a day. Other jokes are very relatable to children not familiar with Islam, for instance they might read the scene with Esa’s antics in the mosque and link it to an experience they’ve had at church or the temple, or a similar place.

MGM: Can we expect more adventures for Omar?

MGM: Is there any feedback you’ve received that really gets under your skin?

Zanib: I’m so pleased to say that I haven’t received any such feedback directly. I did see an Amazon review where someone had pointed out that Omar doesn’t speak perfect English, because he says things like, ‘super obviously!’ That’s because Omar is not the queen. He’s a regular kid in middle grade!

Thank you, Zanib, for taking the time to answer our mo-questions.