Cady and the Bear Necklace by Ann Dallman

Cady and the Bear Necklace by Ann Dallman

Congratulations to Ann Dallman on her deput middle grade novel, Cady and the Bear Necklace. Cady is a 13-year-old girl of Native American heritage, who recently moved from Minnesota to Michigan and attends a reservation school for the first time. We asked Ann about her unique story.
Middle Grade Mojo: How did you gain insight into the world of Indian reservation?

Ann Dallman: I worked as a teacher for 15 years on a Potawatomi reservation in Michigan’s Upper Peninsula. The Potawatomi have seven bands and I became familiar with only one. Therefore, much of what I “gained” or learned is pertinent to that particular place during that particular time. I was privileged to work there when I did as I learned so much about ceremonial life. If teaching staff was asked to participate then, of course, I would. For example, for many years we would begin each week with a ceremony in the school gymnasium. A tribal elder would offer a teaching and instruct the students to behave in a manner that was respectful and open to learning. Older boys would help with the “smudging” that followed. Smudging is when a sage bundle, sweetgrass braid or cedar would be lit and then, using a feather, the resulting waft of smoke would be “washed” over an individual. This is just one very small example. I also met many wonderful people who were willing to share knowledge of their customs and beliefs with me. I was open to learning and gained a true respect f

or the culture and traditions we were exposed to.

MGM: What do you want readers to take away from your story?

AD: I’d like readers to learn more about the native culture and history of the Upper Peninsula of Michigan and of its residents. My story is fictional and my characters are fictional. I wanted to give the reader an exciting mystery to solve but I also wanted my former students, and today’s students, to learn that they are not alone when facing the difficulties that life presents. This is what one of my favorite former students wrote to me last week, “There aren’t many writers out there who write about Algonquin tribes and write it so the general person can understand it. Even when I try to explain to people I work with or hang out with, I am always like “it’s hard to explain…” lol. Also, it was nice to actually see things from a non-native perspective and see how they respect the way of life that a lot of people on the rez take for granted. You worked there for so long and observed how the kids were, observed their families, the elders, the ceremonies. And you got it and embraced it. It shows how much you truly cared about us and reading it made me realize that the teachers did care about us back then.” Casassy Gill, University of Wisconsin-Green Bay graduate 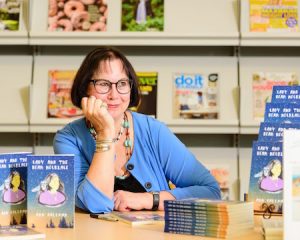 Ann Dallman has lifelong roots in Michigan’s UP. My first Middle Grade novel, Cady and the BearNecklace, was published by Henschel HAUS Books of Milwaukee. I graduated from UW-Madison (Journalism Education) and earned a master’s in Secondary Education/Reading from Viterbo University. I started out as a newspaper reporter/photographer and returned to journalism after retiring from teaching. I love delving into “the story behind the story” whether it be of persons, places or things. I continue to freelance for several publications while writing about 13-year-old Cady, and the challenges she faces—and overcomes—while solving mysteries.