As part of her launch of WE DREAM OF SPACE, the Mojo have been featuring Erin Entrada Kelly with her The Mojo Minute and now we are lucky to have her “sit” down with us and answer a few questions. 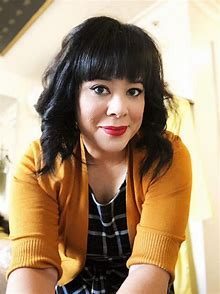 Middle Grade Mojo: We all have different paths to publishing. For me, I didn’t know I wanted to write books until I was downsized about a decade ago. When did discover that you wanted to write and what was your experience in getting your first book published?

Erin Entrada Kelly: I knew from a very early age that I wanted to be a writer. I started writing when I was about eight years old, and I haven’t stopped since. I bought my first copy of Writer’s Market from Waldenbooks when I was in middle school and put stars next to the agents I wanted to submit my manuscripts to. (Keep in mind, the “manuscripts” were only about fifty pages long and were clearly rip-offs of V.C. Andrews and Stephen King. But still.) I subscribed to Writer’s Digest in high school. Becoming a published author was my singular focus in life.

I published several short stories in my twenties before I queried my first novel. Writing short stories helped me discover my true writing voice. After publishing twenty or so pieces of short fiction—all of which were written for adults —  I discovered that most of my work focused on ages 8 to 12. They were mostly coming-of-age stories. For whatever reason, I had no interest in writing about grown-ups. That’s when I realized that I should consider writing middle grade. I haven’t looked back since … and I still have no interest in writing novels for the adult market.

MGM: Your amazing book HELLO, UNIVERSE won a Newbery Award in 2018, take us back to the moment you heard the news.

EEK: At the time, I was working full-time as a corporate copy editor for a Philly-based Medicaid managed care company. I was on my way to work that morning, on I-95, and I was thinking: I wonder which book won the Newbery? I hope it’s so-and-so. I had zero suspicion that it would be HELLO, UNIVERSE. That seemed outside the realm of possibility.

Then I got the call. There’s a video of it on YouTube that I’ve watched many, many times. I called out of work, turned around, and watched the live feed from home. When my book came on the screen, I cried. I’m not a big crier, generally. I didn’t cry when I got my agent, or my book contract. I didn’t cry the first time I held my book in my hands, or at my first book launch. But I cried that morning. 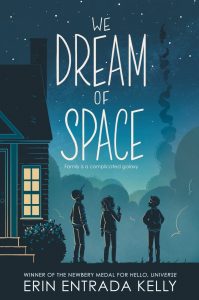 MGM: What is your writing process?

EEK: My writing process is similar for all my books, for the most part. For my most recent book, WE DREAM OF SPACE, it started with a character, a twelve-year-old girl named Bird, and an event: The Challenger disaster. I knew I wanted to write about this girl and I knew I wanted to write about the Challenger. I had the seed of an idea, and before I ever put a word down, I let it grow. I don’t start writing until I have fully realized characters in my head. Then I get a notebook and start putting things down.

WE DREAM OF SPACE required lots of research. Although I grew up in the 1980s, I couldn’t rely on my own memory to set the scene. I needed to truly step back in time. I found two Earth Science books from 1986, which are identical to those Bird and her brothers would have used in science class. I found scrapbooks from the Challenger disaster from an estate sale on ebay. I read many articles from primary sources, asked many people to share their memories of that day, and read as much as I could about Mission Specialist Judith Resnik, who is Bird’s role model throughout the book. I even played the old arcade game Major Havoc, which is something that Bird’s brother does regularly.

MGM: What are some of your favorite MG books? What are you reading right now?

EEK: There are too many to name, so instead I’ll go with the books that influenced me most as a writer.

As a kid, Judy Blume was my hero. When I decided to write MG for adults, I knew I needed to read more contemporary work, and lots of it. So I read stacks and stacks. Of those, NOTES FROM A LIAR AND HER DOG by Gennifer Choldenko and THE UNDERNEATH by Kathi Appelt were my greatest influences. I felt so connected to Ant, the main character in NOTES FROM A LIAR, in a way that I never have before. It was like Choldenko peeked inside my twelve-year-old heart and wrote all my secret thoughts. That’s the power of a good book, and that’s what I wanted to do as a writer.

THE UNDERNEATH showed me that there was no single way to write MG. It could be straight-forward and practical. It could be lyrical and metaphoric. It could be funny, weird, and gross. It could be sentimental, sad, and moving. It could be all of the above. Basically: MG was and is just as diverse in storytelling than books for any other audience.

I’m currently reading WE COULD BE BROTHERS by Derrick Barnes.

MGM: I saw that you have two of your books being adapted (HELLO, UNIVERSE for Netflix and YOU GO FIRST for the stage). How much are you involved in the development process?

EEK: I met with the Netflix team and have complete confidence in them. Films are a different beast, and I trust that they know what they’re doing. I understand and respect that they will bring their own vision to the project, so I prefer to have limited involvement.

With YOU GO FIRST, I have no involvement at all. And I’m fine with that.

MGM: If you would, share with us a memorable moment from when you were of MG age (9-12).

EEK: When I was 11 years old, I finished a book that I considered my masterpiece. It was seventy-five pages long, single-spaced, typed on my dad’s electric typewriter. It felt like a tome. I stacked all the pages together, stapled the edge, and promptly wrote Stephen King a letter to let him know I finished it. (I was a huge fan of Stephen King. In my letter, I told him that if he didn’t write me back, I would just keep writing him letters until he did. Spoiler alert: He didn’t.)

The book was called “Heartache,” which sounded very grown-up, in my opinion. It was quite bloody and may have resembled PET SEMATARY, which was (and is) my second-favorite Stephen King novel, after CUJO.

BUY WE DREAM OF SPACE

About the Author: New York Times–bestselling author Erin Entrada Kelly was awarded the Newbery Medal for Hello, Universe. She grew up in Lake Charles, Louisiana, and now lives in Delaware. She is a professor of children’s literature in the graduate fiction and publishing programs at Rosemont College, where she earned her MFA. Her short fiction has been nominated for the Philippines Free Press Literary Award for Short Fiction and the Pushcart Prize. Erin Entrada Kelly’s debut novel, Blackbird Fly, was a Kirkus Best Book, a School Library Journal Best Book, an ALSC Notable Book, and an Asian/Pacific American Literature Honor Book. She is also the author of The Land of Forgotten Girls, winner of the Asian/Pacific American Award for Literature; You Go First, a Spring 2018 Indie Next Pick; and Lalani of the Distant Sea. The author’s mother was the first in her family to immigrate to the United States from the Philippines, and she now lives in Cebu.