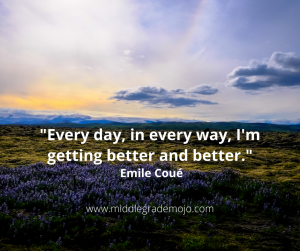 Emile Coué (1857-1926) worked as a pharmacist in France between 1882 and 1910. He noticed that his patients had much better outcomes when he convinced them that the medicines would work. We now call this the placebo effect. Coué began to study how the power of positive thinking helped cure illness.

Coué believed that the mind couldn’t hold two opposing thoughts at the same time. He taught his patients to repeat positive affirmations several times a day while in a relaxed state. While his methods didn’t always cure them, it at least made them feel better and many of his hysteria patients (the catch-all name used then for any mental disturbance) experienced great improvement. His work became the foundation for the self-help and positive thinking gurus that came later such as Norman Vincent Peale and Robert H. Schuller.

As many of us struggle to concentrate on our writing during these stressful times, we might not be achieving our personal goals which can lead to feelings of guilt and failure. Maybe focusing on a positive, daily affirmation will help. As Coué said in his book, Self Mastery Through Conscious Autosuggestion, “Every thought entirely filling our mind becomes true for us and tends to transform itself into action.”

Maybe our writing affirmation could be, “Every day and in every way, I’m writing better and better.”