Seekers of the Wild Realm by Alexandra Ott

Seekers of the Wild Realm by Alexandra Ott 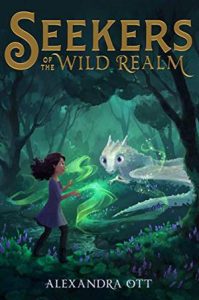 Twelve-year-old Bryn has always dreamed of becoming a Seeker, just like her dad. Only the Seekers are allowed to journey from their small village into the fantastical, untamed wilderness of their island known as the Wild Realm. Once there, they obtain magical items for the village and use magic to protect and heal the incredible creatures native to the Realm.

When one of the elderly Seekers retires, leaving a vacant position, Bryn knows this may be her chance. There’s just one problem: Only boys have ever been Seekers. And the training master makes it clear he will not be training a girl.

But then Bryn’s biggest rival for the Seeker position, a boy named Ari, shows up at her door. He reveals the baby dragon he’s been hiding, and the two strike a deal—if Bryn helps care for the dragon, Ari will share all his training with her.

Even as the two bond over their love of magical animals and their secret trips into the Wild Realm, Bryn doesn’t completely trust Ari’s motives. Especially as she suspects Ari may know more than he’s letting on about the enemy clan stirring up unrest in their village.

When all these secrets come to a head and the stakes are at their highest, Bryn realizes it’s up to her to save her family…and the Realm.

Alexandra Ott writes fiction for young readers, including her debut middle grade fantasy novel Rules for Thieves and its sequel The Shadow Thieves. Her next middle grade novel, Seekers of the Wild Realm, is forthcoming from Aladdin/Simon and Schuster in summer 2020.

Alex graduated from the University of Tulsa, where she studied English. She is currently a freelance editor. In her spare time, she plays the flute, eats a lot of chocolate, and reads just about everything. She lives in Oklahoma with her tiny canine overlord.