The Oddmire Book 2 – The Unready Queen by Willam Ritter

The Oddmire Book 2 – The Unready Queen by Willam Ritter

Today is the official release of William Ritter’s second book in the Oddmire Series, THE UNREADY QUEEN. Readers and reviewers alike enjoyed book one in the Oddmire series, THE CHANGLING. Publishers Weekly said that “Ritter crafts a well-paced adventure filled with whimsy and peril, in which the bonds of family and love prove stronger than any spell or curse. With memorable characters—especially the irrepressible protagonists, who make a delightful team—and an atmospheric setting, this is a strong series opener.”  You should pick up THE CHANGLING and the THE UNREADY QUEEN today! 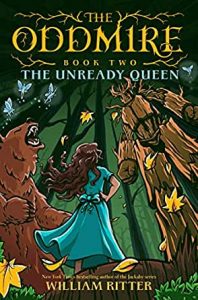 Human and goblin brothers Cole and Tinn are finding their way back to normal after their journey to the heart of the Oddmire. Normal, unfortunately, wants nothing to do with them. Fable, the daughter of the Queen of the Deep Dark, has her first true friends in the brothers. The Queen allows Fable to visit Tinn and Cole as long as she promises to stay quiet and out of sight—concealing herself and her magic from the townspeople of Endsborough.

But when the trio discovers that humans are destroying the Wild Wood and the lives of its creatures for their own dark purposes, Fable cannot stay quiet. As the unspoken truce between the people of Endsborough and the inhabitants of the Wild Wood crumbles, violence escalates, threatening war and bringing Fable’s mother closer to the fulfillment of a deadly prophecy that could leave Fable a most Unready Queen.

“The Oddmire series’ memorable, inspiring characters are full of heart and, combined with the enchanting magic surrounding them, form the strong core of a burgeoning fantasy classic.”
—Booklist, starred review

“In another brilliantly written visit to Oddmire, Ritter returns to an already magical place filled with danger and intrigue, and adds a new chapter to an outstanding series. VERDICT Those who loved book one will adore book two. A wonderful addition to the series and to young fantasy collections.”
—School Library Journal, starred review

“Ritter deftly executes the all-too-timely theme of racist demagoguery—and profiting from it—in a way that is realistic yet hopeful. He also leavens it with humor: Fable, particularly, is a reliable source of silliness and fart jokes . . . Captivating adventure, magical friendship, and just the right amount of goofiness.” —Kirkus Reviews

About the Author- William Ritter is an Oregon author and educator. He is the proud father of the two bravest boys in the Wild Wood, and husband to the indomitable Queen of the Deep Dark.The Oddmire is Ritter’s first series for middle-grade readers. He is also the author of the New York Times bestselling, award-winning Jackaby series for young adult readers. To follow what is new with him, visit his website and follow him on Twitter.