Nikola Tesla was not only a genius, he was a complicated person with an interesting life that sometimes reads like fiction. Amy O’Quinn has done an amazing job capturing all the facinating stories about Tesla’s life as well as his many achievments in the field of electrical engineering. Her book, Nikola Tesla For Kids is a wonderful read, and I would say it’s not just for kids. We asked Amy about her inspiration and writing journey.

Amy O’Quinn: I am excited to have this opportunity to guest post at Middle-Grade Mojo to celebrate Nikola Tesla’s 164th birthday! Thank you so much for having me!

MGM: What inspired you to write a book about Nikola Tesla for children?

AO: I must say that I sort of ‘fell into’ writing about Nikola Tesla. After I finished the edits for my Marie Curie book in early 2016, my (then) editor and I began tossing ideas back and forth for a second book. I really wanted to write about the 1918 flu or perhaps Beatrix Potter, but she thought I should go in a different direction.

That’s when I asked the million-dollar question, “What do you want?” (By the way, that same question helped me land my first book contract.)

My editor mentioned they would like to add a Nikola Tesla book to their ‘For Kids’series. I have an educational background in the hard sciences, my husband has worked in the electrical industry for over thirty years, and my son is an electrical engineer, but I’ll admit that I still had to come around to the idea. I’m a person who has to understand a scientific concept from every angle before writing about it, and I contemplated how difficult it might be to adequately explain electromagnetism, direct and alternating current, wireless transmission of energy, etc. to middle grade students. Moreover, I didn’t know much about Nikola Tesla myself at that point.

But, wow! When I began doing some preliminary research, I was blown away! Tesla—brilliant, accomplished, prescient, ahead of his time, eccentric, quirky—was a writer’s dream. I was hooked. I created a proposal, submitted it to my editor and the editorial committee at Chicago Review Press, and it was accepted unanimously.

I had a blast writing about the life and accomplishments of Nikola Tesla, and I learned a lot!

MGM: There is a lot of false information and conspiracy theories about Tesla on the Internet. How did you weed through the nonsense?

AO: So true. I always stick to reputable and vetted sources/resources when I research and write, but even then, there are often conflicting opinions. However, I make sure that I can cite at least two sources for each fact. There were several interesting and fascinating tidbits I had to cut from the manuscript because I couldn’t nail down more than one source, no matter how many books or newspapers I scoured. Disappointing, yes, but that’s how it goes.

I also used Tesla’s own autobiography and writings, which are obviously primary sources. Yet a few experts wonder if perhaps some of his childhood ‘memories’ might have been somewhat dramatized for effect. Therefore, when I recounted his stories or memories, I made sure to say that Tesla ‘stated’ or ‘recalled’ this or that…and sometimes I added the thoughts of today’s experts.

As far as conspiracy theories go, I did include some of those in the book to show how far-fetched they are and how they’ve been proven to be untrue. But again, I was very careful with my sources.

MGM: What was the most interesting thing you discovered about Nikola Tesla?

AO: I loved how Nikola Tesla was so far ahead of his time. The world then was not ready for a lot of his ideas, and many people considered him to be a mad scientist. Think about it—how many devices and systems in our current day had their beginnings in Tesla’s mind and time?

As far as discovering interesting things about Tesla (and putting his major accomplishments aside), I was most intrigued by his plans for a flying machine! How cool was that?

If Tesla could have visited the future, I don’t really think he’d be that surprised by today’s technology. After all, he was already envisioning much of it well over a hundred years ago.

Think about how much more he could’ve accomplished if he’d had funding, information, and modern resources at his fingertips. It’s mind boggling!

MGM: Did you get to visit any of the places Nikola Tesla lived or worked?

AO: I would’ve loved to visit Serbia and Croatia, but alas, that didn’t happen. However, my daughter was living in Germany at the time, and she was able to travel to some of the Tesla hotspots in my stead and take photos. But no, during my research/writing phase, I didn’t personally visit the places Tesla lived or worked. However, I have been to Niagara Falls and New York City in the past, so I was able to recall and envision those places as I wrote.

It’s definitely ideal to be able to visit the homes and living/work areas of the person I am writing about. In fact, I am writing a biography about Beatrix Potter now, and I was able to go to London to do some research at the V&A’s Blythe House in early March, although the trip was cut way too short due to Covid-19. We were able to book a flight out of England just a few days before everything shut down.

That said, it’s not always possible to do on-site research, especially if the person lived in another country. That’s why I am thrilled and thankful that there are so many virtual opportunities and resources online for writers/researchers these days—and I make use of them.

MGM: How long did it take you to write Nikola Tesla for Kids?

AO: It took me about a year and a half to do all the research and complete the manuscript. I wrote the biography part of the book rather quickly, but the activities took a great deal of time to finish, as they are pretty involved. It takes a while to brainstorm an interesting, relevant, and age-appropriate activity, write the steps and instructions, actually do the activity several times, take pictures, and double-check everything for accuracy and safety. 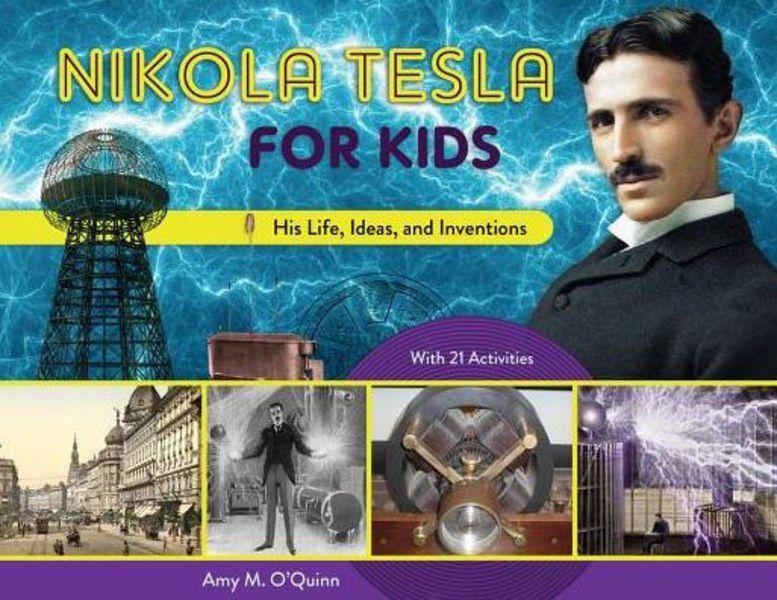 Amy M. O’Quinn is an educator, biographer, and the author of two titles in the award- winning Chicago Review Press ‘For Kids’ series—Marie Curie for Kids and Nikola Tesla for Kids, Her next book, Beatrix, Beyond the Bunnies is set to be released in 2021. Her goal is to make history and science come alive for young readers.

Amy and her husband Chad have six children and live on the family farm in south Georgia. You can visit her at www.amyoquinn.com, Facebook, Instagram, LinkedIn, or Twitter.

Don't miss out on the latest Mojo content. Subscribe and be the first to know what's happening in the middle-grade world.