Eleanor, Alice and the Roosevelt Ghosts by Dianne Salerni

Eleanor, Alice and the Roosevelt Ghosts by Dianne Salerni

Happy book birthday to Dianne Salerni and her new supernatural middle-grade novel, Eleanor, Alice and the Roosevelt Ghosts! We asked Dianne about her latest novel.

Middle Grade Mojo: I love the description of your middle-grade novel as putting “a supernatural spin on alternate history”? What inspired you to create this alternate universe for 13-year-old Eleanor Roosevelt?

Dianne Salerni: The alternate universe came first. I had an idea for an alternate reality where ghosts were real and so prevalent 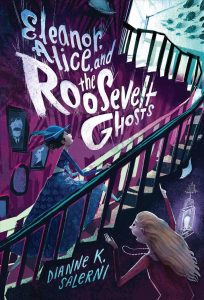 that a scientific discipline had developed to “diagnose” them into categories: Friendly, Unaware, or Vengeful.  Legally, hauntings have to be disclosed and registered with the government. I first wrote a mystery with this premise set in the 1980s. Later, I revised the story to set it in contemporary times. The feedback for both versions was the same: Readers loved the premise, but didn’t find my characters compelling.

Then I stumbled across an article about the unruly Alice Roosevelt, daughter of Teddy Roosevelt. I already knew a little about her, but the article kindled my interest. I also knew a great deal about her shy first cousin Eleanor Roosevelt, by virtue of having taught a biography of Eleanor to my fifth graders when I was a teacher. Both girls lost their mothers at a young age — and Eleanor also lost a brother and her father – but rather than bond over their similar circumstances, Alice and Eleanor were oil and water, with totally opposite personalities. I realized I’d finally found the right protagonists to tackle a dangerously mis-diagnosed ghost in my alternate universe.

MGM: What’s your next project? Are there more adventures for young Eleanor Roosevelt or do you have new historical characters in mind?

DS: My next project is completely different – a multi-dimensional adventure full of conspiracy theories and plot twists titled Jadie in Five Dimensions. The book tackles the premise that our three-dimensional universe exists inside a greater four-dimensional universe (the way Russian dolls nest inside one another). What happens when beings huger and vaster than humans reach inside our smaller universe to interfere with our world?

To better explain, imagine that stick figures on a piece of paper were living beings in a flat, two-dimensional world and could not perceive humans looking down on them. Think of the terrible things an unscrupulous person could do to them! Now imagine a four-dimensional being with the same power over us. That’s what Jadie in Five Dimensions is about. It’s tentatively scheduled to release in the fall of 2021.

MGM: What is the best writing advice you can give in this 2020 COVID environment?

DS: Simply to be kind to yourself. We’re all grieving the life we’ve (temporarily) lost and afraid of what lies ahead. Expecting the same level of creativity and drive from yourself is unrealistic. For those writers who aren’t under a deadline, I suggest writing when it makes you happy – and not forcing yourself to write on a day when it’s just too hard. Do you have a favorite part of the process? For me, I hate first drafts but love revising and editing. So rather than start a new project, I pulled up an old, abandoned manuscript to work on. Conversely, for an author who prefers the excitement of new words to revising old ones, they should lay their revisions aside and indulge in Shiny New Ideas if that gives them joy.

Authors on a deadline don’t have that same freedom to take days off or switch projects. To them I send virtual hugs and coffee and suggest they resist Facebook and Twitter in favor of funny animal videos on YouTube. (Actually, we should all probably do that.)

Praise for Eleanor, Alice and The Roosevelt Ghosts:

“A spooky, fast-paced, and inventive tale. Salerni expertly blends fact and fiction, providing a glimpse of Eleanor and Alice Roosevelt’s childhood that is so compelling, you almost wish the ghost parts were true.”—Erin Bowman, Edgar Award–nominated author of Contagion and The Girl and the Witch’s Garden

About the Author: Dianne Salerni http://diannesalerni.com/

Dianne K. Salerni has written many books for children and young adults, including state-award nominated series The Eighth Day and Junior Library Guild Selection The Caged Graves. She attended the University of Delaware and the University of Pennsylvania before teaching fourth and fifth grades for many years. Now Dianne spends her time hanging around creepy cemeteries, climbing 2,000-year-old pyramids for book research, and volunteering at her local rescue animal shelter. She lives in Pennsylvania with her family. Visit her at www.diannesalerni.com.