The Language of Ghosts by Heather Fawcett

The Language of Ghosts by Heather Fawcett

Forced into exile on an enchanted, moving island, ex-princess Noa Marchena has two missions: reclaim her family’s stolen throne and ensure that the dark powers her older brother, Julian, possesses don’t go to his head in the process. But between babysitting her annoying little sister, Mite, and keeping an eye on the cake-loving sea monster that guards the moving island, Noa has her hands full.

When the siblings learn that their enemies are searching for a weapon capable of defeating Julian—whose legendary spell weaving is feared throughout the kingdom—once and for all, they vow to get to it first. To everyone’s surprise, the key to victory turns out to be a long-lost magical language—and only Noa can speak it.

But what if by helping her brother, Noa ends up losing him?

The middle grade landscape is filled with magical children and sibling relationships. Heather Fawcett’s The Language of Ghosts paves its own way with a combination of rich of world building, authentic sibling relationships, and enough twists and adventure to satisfy any fantasy lover’s appetite. The book had a way of slowly drawing me deeper until I reached a point where I needed to keep reading to satisfy my need to see the story come to its conclusion. If you have a busy schedule, I don’t recommend diving into these magical pages, you will have to cancel other plans. If you are a lover of well crafted characters and magical fantasy, go out an buy The Language of Ghosts today. 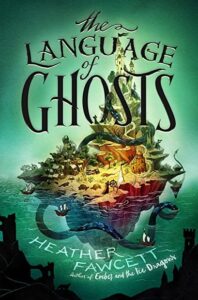 Heather lives on Vancouver Island, Canada, where she enjoys wandering around in the wilderness and only occasionally getting lost. Before becoming a writer, she worked, among other things, as an archaeologist, a technical writer, and a backstage assistant for a Shakespearean theatre company. She has a Master’s degree in English Literature and briefly considered becoming a professor, before she realized it involved more than reading books, drinking excessive amounts of tea, and wearing colourful elbow patches.

Heather’s other books include Ember and the Ice Dragon and Even the Darkest Stars. Learn more about Heather and her books by visiting her website and following her on Twitter.