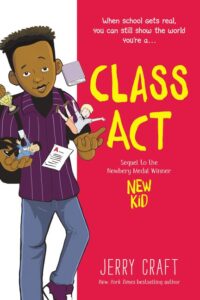 As the follow-up to the award winning New  Kid, Class Act by author Jerry Craft is another must read. It delivers a powerful message for children (and adults) to absorb, especially in a time where there is a lot of attention being focused on social justice and equality. Craft is able to present the internal and external conversations that capture how different, and yet similar, we all are. Though this is a story focused on the lives of eighth-graders, there are many take-aways that are universal. I see this book promoting a dialogue among students, or as a book club selection at any age.

If you haven’t read New Kid, go check it out, it isn’t necessary to enjoy Class Act, but I highly recommend both of stories for anyone and everyone.

About the Book: New York Times bestselling author Jerry Craft returns with a companion book to New Kid, winner of the 2020 Newbery Medal, the Coretta Scott King Author Award, and the Kirkus Prize. This time, it’s Jordan’s friend Drew who takes center stage in another laugh-out-loud funny, powerful, and important story about being one of the few kids of color in a prestigious private school.

Eighth grader Drew Ellis is no stranger to the saying “You have to work twice as hard to be just as good.” His grandmother has reminded him his entire life. But what if he works ten times as hard and still isn’t afforded the same opportunities that his privileged classmates at the Riverdale Academy Day School take for granted?

To make matters worse, Drew begins to feel as if his good friend Liam might be one of those privileged kids. He wants to pretend like everything is fine, but it’s hard not to withdraw, and even their mutual friend Jordan doesn’t know how to keep the group together.

As the pressures mount, will Drew find a way to bridge the divide so he and his friends can truly accept each other? And most important, will he finally be able to accept himself?

About the Author: Jerry Craft is the New York Times bestselling and Newbery Medal winning author of the graphic novel, New Kid.  His second graphic novel, Class Act, publishes on October 6, 2020. Craft is also the creator of Mama’s Boyz, an award-winning comic strip which won the African American Literary Award five times. He is a cofounder of the Schomburg Center’s Annual Black Comic Book Festival. He received his BFA from the School of Visual Arts.