February celebrates Black History. In honor of this, we have selected books that celebrate equality. Here are our selections: 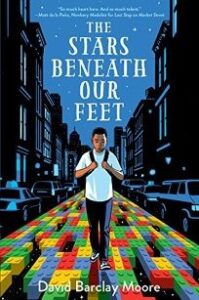 The Stars Beneath our Feet by David Barclay Moore.  It’s Christmas Eve in Harlem, but twelve-year-old Lolly Rachpaul and his mom aren’t celebrating. They’re still reeling from his older brother’s death in a gang-related shooting just a few months earlier. Then Lolly’s mother’s girlfriend brings him a gift that will change everything: two enormous bags filled with Legos. Lolly’s always loved Legos, and he prides himself on following the kit instructions exactly. Now, faced with a pile of building blocks and no instructions, Lolly must find his own way forward.

His path isn’t clear—and the pressure to join a “crew,” as his brother did, is always there. When Lolly and his friend are beaten up and robbed, joining a crew almost seems like the safe choice. But building a fantastical Lego city at the community center provides Lolly with an escape—and an unexpected bridge back to the world.

David Barclay Moore paints a powerful portrait of a boy teetering on the edge—of adolescence, of grief, of violence—and shows how Lolly’s inventive spirit helps him build a life with firm foundations and open doors.  -KS

The Magic in Changing Your Stars by Leah Henderson. This is a story about a boy named, Ailey Benjamin Lane, who wants to be a star in the school production of The Wiz. But when he messes up the audition, he’s ready to give up dancing altogether. Then his grandfather tells him a secret story about his youth and where he can find his special tap shoes. Ailey puts on the shoes and is transported into the past where he learns to never give up on his dreams. -DDA

The Beloved World of Sonia Sotomayer by Sonia Sotomayer is the middle-grade adaptation of the memoir of Justice Sonia Sotomayer—the first Latino woman appointed to the United States Supreme Court. It discusses issues like racism, privilege, and affirmative action. -SE

Genesis Begins Again by Alicia D. Williams. A Newberry Honor Book, Winner of the Coretta Scott King-John Steptoe Award for New Talent, A Morris Award Finalist, and a School Library Journal  Best Middle-Grade Book of 2019, it is a story about internalized racism and the courage needed to overcome obstacles.  -LB 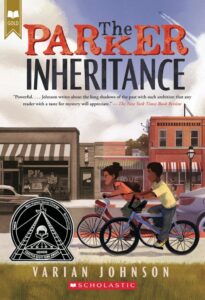 The Parker Inheritance by Varian Johnson.

In the spirit of THE WESTING GAME, Varian Johnson has given us a challenging puzzle to solve and an honest look at race relations in the south from the 1950s until now. As Candice and her friend, Brandon try to find the clues and solve the mystery of the Parker Inheritance. If they can solve it, they will find a treasure of $48 million dollars, 10% of which they get to keep. The rest of the money goes to the city of Lambert. Candice will also be able to prove to the town that grandmother wasn’t crazy when she tried to find the treasure 10 years ago.

Candice and Brandon have to unearth the story of one particular African-American family that had been run out of town in the 1950s for challenging the white school’s tennis team to a match and winning.

So this book is actually two stories and Johnson does a great job of interlocking the past and present with the clues. He also honestly depicts how life was for African-Americans in the south during the 1950s.  It was named a 2019 Coretta Scott King Honor and Publishers Weekly Best Book of 2018, plus other awards. -KZ