Interview with Aileen Weintraub, author of We Got Game

Interview with Aileen Weintraub, author of We Got Game

We’re so excited to talk to Aileen Weintraub, the author of more than 50 books for children. Her newest book, We Got Game: 35 Female Athletes Who Changed the World releases on May 4th.

Middle Grade Mojo: You’ve written many other nonfiction books for kids with a wide range of topics from rocks and minerals to a knock-knock joke book to a book about the band Kiss. Why did you decide you wanted to write about women athletes?

Aileen Weintraub: Thank you so much for inviting me to Middle Grade Mojo! I’m so excited to be here. This is such a great question. I write on a wide range of topics, but I am most passionate about empowering women and girls to be their best selves. My previous social justice book Never Too Young! 50 Unstoppable Kids Who Made a Difference won a Parents’ Choice award and went on to be a bestseller. With that outpouring of support from readers, I knew there was more work to do. I wanted to continue to spotlight people making changes in the world in the hope of inspiring others. The athletes in We Got Game! are activists who focus on issues including racial equality, equal pay, climate change, cyberbullying, disability advocacy, LGBTQ rights, and so many others. I felt it was important to focus on both their successes and their social justice efforts to show kids that they can DO anything and BE anything if they set their minds to it.

MGM: Some of the athletes are from popular sports such as gymnastics, soccer, and swimming, but you’ve also included athletes from non-mainstream sports such as squash, boxing, and rock climbing.  How did you decide which athletes to feature? Were there any athletes that you would’ve liked to include but couldn’t?

AW: There are so many amazing athletes around the globe it was difficult to narrow the book down to thirty-five. I wanted to showcase diverse athletes participating in a wide range of sports. I also wanted to correct misperceptions of what it means to be an athlete. For example, I often hear that ballerinas are not considered athletes, but that’s so far from the truth. Ballerinas train for hours a day and are incredibly strong and focused. Misty Copeland even teamed up with Under Armour, becoming the first classical dancer to have a sports brand endorsement. Many of the athletes represented in the book overcame hardship to get to where they are today. I want young people to know the path to success is not always easy. Ultimately, these women were chosen because they are GOATS, meaning the Greatest of All Time, and because they have made it their mission to use their platform to advocate for change.

MGM: Are you an athlete? What is your sports experience? Is there a sport that you know about now that you would’ve like to have played as a kid? Or has writing this book inspired you to try a sport?

AW: I don’t consider myself an athlete. As a matter of fact, I went to a high school that didn’t even have a sports program. I tried gymnastics when I was a kid, but I wasn’t good at it. Now, as an adult, I’ve taken up boxing. It’s so much fun, and I’ve met some really nice people I wouldn’t have met otherwise. It’s also given me a lot more confidence in my body and what it is capable of doing. My instructor is a former professional fighter, and he pushes me to my limit; it’s the best workout I’ve ever had. I want women to know that it’s never too late to take up a new sport. So often I see girls drop out of sports once they get older, and I would really like to see that change. Participating in a sport is a great way to stay in shape, make new friends, and feel good about yourself. A few years ago, if you told me I’d be doing running jump kicks on a heavy weight bag, I would have laughed, but now I’m doing it and it feels great.

MGM:  Tell us about one of your favorite athletes in the book and why?

AW: This is such a difficult question because I’m in awe of all the athletes in this book. My son plays soccer and he takes it very seriously, so I would have to say if I had to choose an athlete I really admire, I would chose Abby Wambach. She is a fierce athlete who stands up for what is right, fights for gender equality, and is serious about closing the wage gap. She wants to change the old rules and help pave the way for women to be the best they can be, not only on the field but in the world.

MGM: As mentioned earlier, you have written many nonfiction books for kids. How did you get started as a children’s writer? Why did you want to write for children?

AW: I was really lucky because I knew from an early age that I wanted to be a writer, especially a children’s writer. My local children’s librarian instilled a love of reading in me, and sparked my interest in writing. Librarians and teachers deserve a world of credit for all they do. I grew up in Brooklyn, New York, and after a few years of working various jobs on Wall Street and in advertising, I eventually landed a job as an editor at a children’s publishing company. I knew I had found my calling. That job taught me so much about both sides of the business. When I left that job to become a full time freelancer, I began writing more books. I enjoy writing nonfiction books for children because there is so much they have yet to discover and learn about. I think any topic can be fun and engaging if presented in the right way. Writing for children is rewarding because kids are curious and love to explore new ideas and ways of thinking about things.

MGM: What projects are you working on next? Or would like to work on next?

AW: I’ve been working on a project for a few years that is finally coming to fruition and I’m so excited about it! My next book is called KNOCKED DOWN A High-Risk Memoir and it releases in March 2022. Here’s a little blurb about the book: “Knocked Down is the hilarious story of a free-spirited, commitment-phobic Brooklyn girl who, after a whirlwind romance, finds herself living in a rickety farmhouse, knocked up, and faced with bed rest. Suddenly, the farmhouse is collapsing, her marriage is crumbling, and she finally learns the hard truth about her father. Now, this forced grounding pushes her to come to terms with who she really is and the life-or-death choices she must make.”

Knocked Down is obviously a different genre than the children’s books I usually write, but many of the themes are similar, including the focus on empowerment, standing up for oneself, and making sure our voices are heard.

Thank you so much for inviting me to Middle Grade Mojo!

I’m also happy to email a digital downloadable and printable 8-page activity packet filled with puzzles, trivia, journaling and more to educators and librarians with proof of purchase from any store that sells books throughout the month of May. All they have to do is reach out to me through my website  aileenweintraub.com 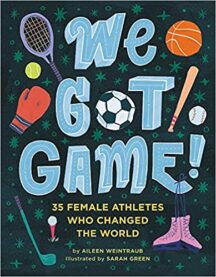