Recently released, Nightingale by Deva Fagan, has launched with rave reviews! It’s a middle grade fantasy with many layers, including a diverse group of friends, fighting for social equality, and being one’s own hero in a way that is enlightening and inspiring. I asked Deva about her own writing adventure. 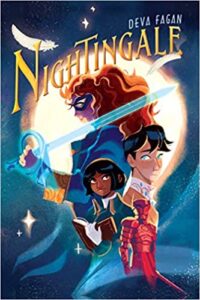 What was your favorite part about writing the book?

One of the things I do often when building a fantasy world is to start with something closer to a real setting, and then ask myself how things would be different based on the magical elements of the world. For example, in NIGHTINGALE the magic is based on a power called aether, which allows people to craft wondrous and sometimes dangerous devices. But when I wrote the first draft, I had characters riding normal bicycles and going to soda fountains, and reading newspapers.

I had so much fun working on my revision, taking all those mundane things, and figuring out how to make them more magical. Bicycles became flying velocipedes, and the soda fountain became a miraculous wonder that sometimes generates giant bubbles that can trap a person inside them. Instead of newspapers, the people of my world would read the latest gossip and breaking headlines from enormous ephemera screens on the sides of buildings, complete with flickering images replaying the deeds of my protagonist Lark in her guise as Nightingale, the newly chosen (but reluctant!) champion of the realm.

What’s one thing you want kids to take away from the book?

I wrote NIGHTINGALE in part to ask myself a bunch of questions. Like, what makes a hero? What is worth fighting for? What do you need to do to really change things for the better in your world? But I never set out intending to provide answers. I’d much rather inspire readers to ask themselves those same questions, and find their own answers!
BUY HERE!
Learn more about Deva Fagan and her middle grade novels by visiting her website and social media at
www.devafagan.com
www.instagram.com/devafagan/
https://twitter.com/devafagan/
By Debbie D'Aurelio|2021-06-21T10:37:01-04:00May 13th, 2021|Author Interview, Book Launch, Mo Reading|0 Comments