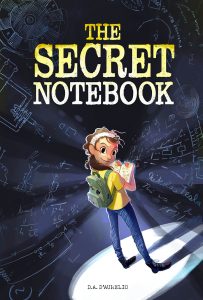 The Secret Notebook by Debbie DAurilieo:  Riley Green is a twelve-year-old student at an elite school in Washington DC. She loves inventing things and doing detective work. When her teacher’s classroom gets ransacked, and a death message is left on the board, Riley has to put her super-sleuthing skills to work. Why was the inventor, Nikola Tesla’s notebook put in her backpack? Who wants to get their hands on it? And for what reason?

The Secret Notebook is an engaging, fast-paced middle-grade story. Young readers will enjoy the mystery and adventure elements while teachers will love that kids are learning about a little-known but important inventor, Nikola Tesla. Sprinkled throughout the story are bits of trivia about Tesla and quotes from the inventor himself. History, mystery, humor, and adventure make this an excellent choice for middle-grade readers.  -SE 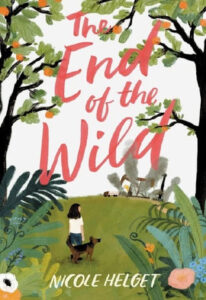 The End of the Wild by Nicole Helget: Fern has taken over the duties of running the household after her mother and baby brother died in a car crash. She helps her stepdad forage for food in the woods behind their house. Using her mother’s hand-written cookbook as a guide, Fern knows how to find mushrooms, berries, roots and plants to make healthy and nutritional meals for her stepdad and two brothers. This foray into plant and animal life in the forest will impress every young biologist. When a fracking company moves into town, Fern’s precious forest is in danger of being turned into a wastewater pond. Fern doesn’t just rely on the forest to help feed her family, she loves it. It’s the one place that she feels safe and close to her mother. But the fracking company offers high-paying jobs and her stepdad gets hired. This remarkable book tackles the issues of rural poverty, ecology, and fracking in a way that shows just how complicated these issues are.  -KZ 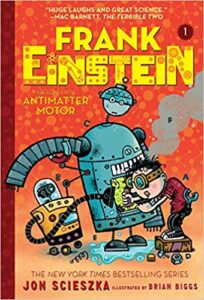 Frank Einstein by Jon Scieszka:  Kid-genius and inventor Frank Einstein loves figuring out how the world works by creating household contraptions that are part science, part imagination, and definitely unusual. In the series opener, an uneventful experiment in his garage-lab, a lightning storm, and a flash of electricity bring Frank’s inventions—the robots Klink and Klank—to life! Not exactly the ideal lab partners, the wisecracking Klink and the overly expressive Klank nonetheless help Frank attempt to perfect his inventions.. . . until Frank’s archnemesis, T. Edison, steals Klink and Klank for his evil doomsday plan! -KS 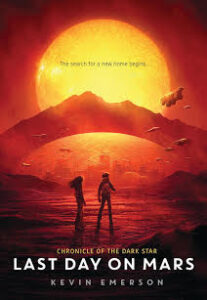 Last Day on Mars by Kevin Emerson:  Science, science fiction, and fast-paced adventure come together with a bang in this series opener. Often described as The Martian for kids, it is so much more.

The year is 2213 and the human race has left Earth. It has been living on Mars temporarily before leaving for a new home near a distant star. On departure day, when everyone else has boarded the space ships, Liam and Phoebe stay behind with their parents who are scientists who have to complete a few last tasks. What could possibly go wrong? Exploding stars, sabotage, evil aliens, and more make for a wild ride.  Before the day is out they make discoveries about space and time that change them forever. The Last Day on Mars is one of Booklist’s 50 Best Middle-Grade Novels of the 21st Century. A STEM teachers guide is available on the author’s website at kevinemerson.net.  -LB 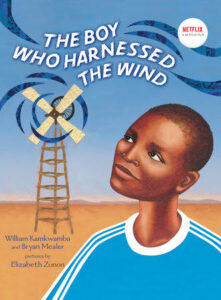 The Boy Who Harnassed the Wind by William Kamkwamba:  Based on his real life, Kamkwamba tells his story of how he used science and ingenuity to save his village from famine. When a terrible drought struck William Kamkwamba’s tiny village in Malawi, his family lost all of the season’s crops, leaving them with nothing to eat and nothing to sell. William began to explore science books in his village library, looking for a solution. There, he came up with the idea that would change his family’s life forever: he could build a windmill. Made out of scrap metal and old bicycle parts, William’s windmill brought electricity to his home and helped his family pump the water they needed to farm the land.

Retold for a younger audience, this exciting memoir shows how, even in a desperate situation, one boy’s brilliant idea can light up the world. Complete with photographs, illustrations, and an epilogue that will bring readers up to date on William’s story, this is the perfect edition to read and share with the whole family. -DD
Buy
By Sherry Ellis|2021-05-13T14:10:25-04:00May 13th, 2021|Mo Reading|0 Comments