First up, THE DUST BOWL by Michelle Jabès Corpora

Set in the 1930s Oklahoma, this American Horse Tale is the story of a young girl who makes the difficult 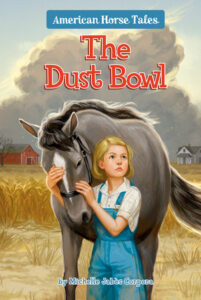 decision to leave her family and move to California so she can stay with her horse.

A young girl named Ginny and her family are dealing with the hardships of the Great Depression, and in order to survive, her dad decides they must sell their horse, and Ginny’s best friend, Thimble. But Ginny will do anything in order to find a way for them to stay together, and chooses to leave her family in Oklahoma and travel west to California. The Dust Bowl is part of a series of books written by several authors highlighting the unique relationships between young girls and their horses.

Ginny is a girl after my own heart! Sell the horse, never! I could totally relate to her desperation to save Thimble, and  the historical information about life during the depression was very well done.

Michelle Jabès Corpora is a writer, editor, community organizer, and martial artist. In addition to working in the publishing industry for more than a dozen years as an editor and concept developer, she has ghostwritten five novels in a long-running middle grade mystery series. American Horse Tales: The Dust Bowl is Michelle’s first novel under her own name. Her second novel, The Fog of War: Martha Gellhorn at the D-Day Landings (Pushkin Press), also publishes in 2021

Next, HOLLYWOOD by Samantha M. Clark 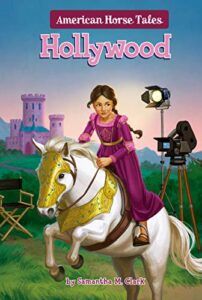 Set in modern-day California, this American Horse Tale is the story of a young girl who, along with her family’s horse, is destined for the big screen.

Juniper is a young girl who dreams of making it big in the movies along with her horse, Able. In particular, Juniper is obsessed with getting Able onto her favorite television show, Castle MacAvoy, and will do anything, even slay dragons, to make that happen. Hollywood is part of a series of books written by several authors highlighting the unique relationships between young girls and their horses.

I like a girl who takes matters into her own hands! When Able gets the chance to perform on the TV show Castle MacAvoy but almost blows the audition, Juniper lends a hand! She jumps on his back and rides him to success. Plus, she lands herself a job as a stunt rider. What an awesome premise! HOLLYWOOD has a great lesson about comparing yourself to others which will resonate with a lot of middle grade readers.

Samantha M. Clark is the award-winning author of The Boy, The Boat, And The Beast and the forthcoming Arrow, both published by Paula Wiseman Books/Simon & Schuster. She lives with her husband and two kooky dogs in Austin, Texas. Samantha is the Regional Advisor for the Austin chapter of the Society of Children’s Book Writers & Illustrators, and explores wardrobes every chance she gets.

Grab these two books for your horse-loving readers!

About the Author: Lisa Lewis Tyre