October is a month of ghosts, ghouls, and goblins. Here is our list of scary reads to celebrate the season.

Creepy and True:  Ghosts Unveiled by Kerrie Logan Hollihan:  Ghosts Unveiled contains tales of ghosts of all kinds—cats, dogs, soldiers, famous people—and from places around the world. Most would think of ghosts as people who have lived long ago. But in this collection, there are ghosts of people who have recently died.
The stories are very interesting, and the pictures and educational tidbits make it even more engaging.  -SE 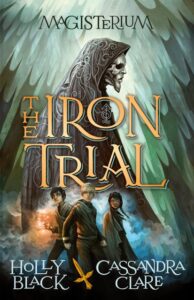 The Iron Trial by Holly Black and Cassandra Clare: For an age-appropriate scary fantasy, The Iron Trial is my pick for a book that will keep kids turning the pages. All his life, Call has been warned by his father to stay away from magic. If he succeeds at the Iron Trial and is admitted into the Magisterium, he is sure it can only mean bad things for him. So he tries his best to do his worst and fails at failing. Now the Magisterium awaits him. It’s a place that’s both sensational and sinister, with dark ties to his past and a twisty path to his future. The Iron Trial is just the beginning, for the biggest test is still to come.  -DDA 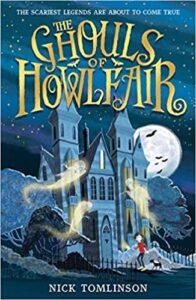 The Ghouls of Howlflair by Nick Tomlinson:  This is a perfect Halloween read! Molly suspects the creepy legends of Howlfair are coming true when she uncovers evidence the town’s mythical monsters are alive and well! She and her friends must become monster hunters to keep the town safe.  -LB

City of Ghosts by V. E. Schwab:  Ever since Cass almost drowned (okay, she did drown, but she doesn’t like to think about it), she can pull back the Veil that separates the living from the dead . . . and enter the world of spirits. Her best friend is even a ghost. So things are already pretty strange. But they’re about to get much stranger. When Cass’s parents start hosting a TV show about the world’s most haunted places, the family heads off to Edinburgh, Scotland. Here, graveyards, castles, and secret passageways teem with restless phantoms. And when Cass meets a girl who shares her “gift,” she realizes how much she still has to learn about the Veil — and herself. And she’ll have to learn fast. The city of ghosts is more dangerous than she ever imagined.
This was an engaging read, with characters I enjoyed and best of all – perfectly creepy! -LLT
Buy

Lockwood & Co. The Screaming Staircase by Jonathan Stroud:  For more than fifty years, England has been affected by a horrifying epidemic of ghosts. They can be exterminated with the proper equipment, but only young people have the psychic ability to sense the ghosts.Lucy Carlyle, a talented young agent, joins a small London agency run by the charming and equally talented Anthony Lockwood and assisted by the brilliant and sarcastic George. When one of their cases goes horribly wrong, they have a chance to save their business by spending the night in one of the most haunted houses in England. All they have to do is survive the night, which no one else has managed to do.

Jonathan Stroud blends humor and horror perfectly. It’s amazing how he can make me laugh and shiver at the same time. This is the first in a series of five and one of my all-time favorites.  -KZ