Mo Reading: The Einsteins of Vista Point by Ben Guterson

Mo Reading: The Einsteins of Vista Point by Ben Guterson

Eleven-year-old Zack Einstein and his family have moved to Vista Point so his parents can open a bed-and-breakfast. They want a fresh start in a new place because a few months before, the youngest Einstein was killed in an accident. Zack blames himself. If only he had stopped his little sister Susan from chasing after the kitten, she wouldn’t have been hit by a car.

Zack can’t forget that fateful day and his role in it. Instead of helping with the house renovations like the others, Zack prefers to spend time alone in his room rereading his favorite books.

One day, while looking out of his window, Zack sees a girl walking around the Tower. Nicknamed the “Tower” by the Einsteins, the neglected, nine-sided building used to be a comfort station for travelers, but has been boarded up for years. When Zack goes to investigate, he meets Ann, a friendly nine-year-old. They go inside the Tower and see a large medallion on the ceiling covered with a spiral of nonsense words. Zack wonders what they might mean. He also wonders when he’ll see Ann again.

One night, Zack and his brother Ethan, and two sisters Miriam and Ruth are sitting on the steps of the Tower to look at the stars when they see flashes of light coming from the woods on the other side of the river. Ethan thinks it’s a signal in Morse Code.

Zack and his siblings work to decipher the strange words on the medallion and break the code of the lashing lights. But only Zack can uncover the mystery of Ann, because he’s the only one that sees her.

The codes, ciphers, and the enigmatic Ann kept me intrigued, while Zack’s journey through grief to acceptance kept me emotionally engaged. Guterson deftly demonstrates how people grieve in different ways and at different times. I especially appreciated how caring the Einsteins were to each other as they start a new life without their beloved Susan.

While this has a different feel than Guterson’s “Winterhouse” series, it won’t disappoint. This mystery with a touch of mystical kept me reading past my bedtime and caused my eyes to water more than once. 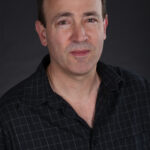