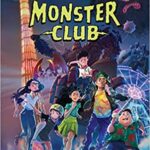 Almost everyone calls Eric “Doodle” because he doodles a lot. And he’s so good at it that he got  into Mark Twain Middle School for the Gifted and Talented.

His favorite thing to draw is Brickman, a fighting monster he designed for the game he and his best friend, Yoo-Hoo created. They, along with three other friends play it during lunchtime. They call themselves the Monster Club.

Starting sixth grade is never easy, but it’s been even harder for Eric. His parents are fighting. Money is tight after a hurricane ravaged the family-owned amusement park at Coney Island. His dad has been working long hours trying to rebuild King’s Wonderland in time to open for the summer season. If he can’t, the bank will foreclose and he’ll lose the park.

Eric finds a strange bottle of ink in his dad’s stash of relics. When he draws his monster Brickman with it, the creature comes to life. That gives Eric the brilliant idea of bringing all the Monster Club monsters to life and staging an epic battle on opening day of Kings Wonderland. He’s sure this will pull in crowds of people and the park will be saved. What could go wrong?

Everything, of course. The harmless monster battle turns life or death when an evil monster comes to life. And it’s all Eric’s fault. Saving the park becomes the least of his worries. He has to save his friends’ lives!

The authors Darren Aronofsky and Ari Handel put their movie-making expertise into this action-packed story. It’s full of exciting fight scenes that the fans of the Marvel movies will love. On an emotional level, middle schoolers will relate to Eric’s struggles with accepting the inevitable changes that are part of the growing up and moving into a new stage of life. It takes a little bit of suspending disbelief to fully enjoy this contemporary tale with the magical element, but I believe readers between ages ten and up will have no problem with that. If Darren Aronofsky’s name sounds familiar, it’s because he directed the movies Pi and Black Swan, as well as many others.