Last in a Long Line of Rebels 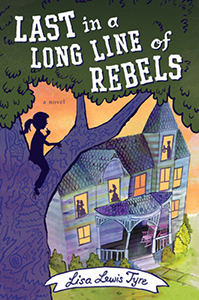 Write one paragraph describing your thoughts about Last in a Long Line of Rebels, and include one question you have that you hope to learn the answer to when you read. Share your paragraph with the class.

Last in a Long Line of Rebels contains many words that may be new for you. Some of these words are speci c to the American Civil War. Prior to reading, it might be beneficial to acquaint yourself with a few of the more difficult or unfamiliar words.

While you read Last in a Long Line of Rebels, look carefully for additional words you do not know. As soon as you come across a new vocabulary word, jot it down on the Master Vocabulary List.

Lou is very upset about the news she overheard about possibly losing her house. Put yourself in her shoes. How would you feel if you heard you might lose your home?

If These Walls Could Talk

What is the difference between a house and a home?

If the walls in your home could talk what would they say? Choose a memory and write about it from the perspective of the walls of your home.

Genealogy is the study of ancestral stories or our family’s past. Interview someone in your family about a story from the past. It can be about something that happened a really long time ago or recently.

Draw an outline of a human gure, which will represent Lou, on a large piece of paper. Using Chapters 1-5 as evidence, write any known details about Lou inside the outline. Outside the outline, discuss and write any questions about Lou that you might have.

Uncovering history is like trying to solve a mystery. Using the information from chapters 1-5, what clues have been gathered about Lou’s family’s past?

Create your own notebook of The Verified Truth about The Mayhews. Be sure to list all details, names, and places that have been mentioned so far.

How do you think Louise Duncan Mayhew’s diary entries that start each chapter will fit in to the story as a whole?

Lou has created a very detailed plan on how to retrieve the book from George Neely’s hotel room. Using details mentioned in the text, draw a map of the area, marking clearly Lou’s plan from the an- tique store to the hotel.

Other important landmarks, such as antique store back door and the lattice should be included, as well as the placement of each person.

Be creative and add other details based on what you know about Zollicoffer.

More so than a Family Tree, a Family Crest has long been a symbol of a family’s identity and values. Originally used to identify warriors dressed in armor, family crests or coats of arms have been passed down through generations.

Create your own family “tree” illustration using symbols and colors to represent and identify who your family is. Refer to the cover illustration for inspiration.

In your own words, describe Lou’s plan as detailed in Chapter 10.

Do you think it will work?

What do you predict will happen when the kids attempt to retrieve the book from Mr. Neely’s hotel room?

Write your prediction in the form of a chapter.

A person’s home can say so much about them.

Write a description of your home, as if you are a character in a novel. Be sure to use the ve items and any other details to help the reader better understand your character.

Before the end of Chapter 16 Lou asks God to give her an obvious and quick sign regarding whether she should keep looking for the gold. And then she arrives home to see her oak tree being cut down.

Do you think Lou will take this as a sign from God? How so? Explain your answer.

Below are a few nal project ideas for the conclusion of Last in a Long Line of Rebels.

If you were to write a historical novel based on your own heritage, where would you set it?

o Research the historical event in the library or on the Internet.
o Once you have the historical facts, set yourself in that story and build the ction.
o Create a 500-word synopsis of the historical ction story based on your own heritage.