Interview with Erin Entrada Kelly about her newest book!

Interview with Erin Entrada Kelly about her newest book! 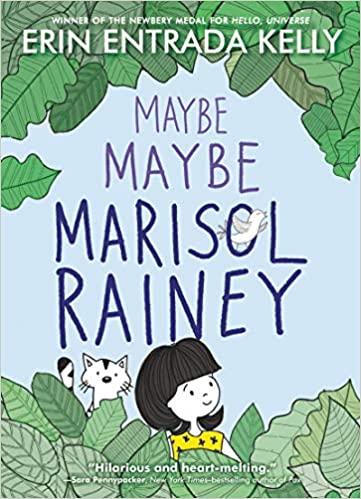 Erin Entrada Kelly was recently awarded a Newbery Honor for We Dream of Space and she won the Newberry Medal in 2018 with Hello, Universe. Middle Grade Mojo was honored to get to chat with her new early middle grade novel Maybe, Maybe, Marisol Rainey which released on May 4th.

Middle Grade Mojo: In Maybe, Maybe, Marisol Rainey we meet the wonderfully imaginative, yet fearful, 8-year-old Marisol. You have said Marisol is a lot like you were as a child. Just how autobiographical is this story?

Erin Entrada Kelly: The character of Marisol is very autobiographical. I modeled her after my eight-year-old self, including her best friend, Jada, who is inspired by my own childhood BFF. Marisol’s family dynamic is quite different, though. She has an older brother. I have an older sister. Marisol’s father works offshore. Both of my parents worked, but they were rarely away from home.

It’s difficult for me to write a character if they’re too much like myself, so I always look for ways to create distance. I wanted Marisol to be her own person. That said, I was both imaginative and fearful as a kid. I thought everything around me was sentient. I loved Charlie Chaplin. I loved my best friend. I loved cats. I had pity parties. Marisol and I are very much alike.

MGM: Marisol is afraid of a lot of things, but mainly the big magnolia tree in her yard, which she calls Peppina. Why is being afraid of climbing a tree causing Marisol so much stress?

Being afraid is not a comforting emotion, obviously, but there are other things going on, too. Marisol is embarrassed about being afraid, because no one else seems scared at all. She is jealous of Jada for climbing the tree so easily. She is jealous of her brother, Oz, for the same reason. And she doesn’t want to hurt Peppina’s feelings.

MGM: You got to illustrate Maybe, Maybe, Marisol Rainey! You’re obviously a talented artist as well as writer. Was it a blessing to get to do your own illustrations? Or did you say to yourself, “What did I get myself into?”  Will you be doing more illustrations in the future?

EEK: My feelings evolved over time. At first, my attitude was 10% Blessing and 90% What Did I Get Myself Into. Those numbers have almost completely reversed.

Illustrating was difficult, and completely outside of my comfort zone. Writing comes much more easily to me, because I’ve been doing it nonstop my entire life. I’ve always been a “doodler,” but never thought of myself as an illustrator. Illustrating my own book was like learning a new language. At times, I literally cried while holding my drawing pencil. I was full of paralyzing self-doubt, but I had so much support along the way. My editor believed in me with total confidence. My partner, Dan, is a graduate of the Kubert School, and he taught me everything he knew. And many illustrators in the industry gave me tips and tricks and words of support.

I worked hard—sometimes through tears, yes—for each one of those illustrations. But that’s also why I’m so, so proud of this book.

Marisol is the first in a series, so you’ll see more illustrations from me! Now that I’ve proved to myself that I can do it, there won’t be as many tears.

MGM: Your main characters tend to share a similarity of feeling like they don’t fit in. Why do you think that is a strong theme for MG novels?

EEK: It’s a universal feeling. All of us know what it’s like. Some more than others.

MGM: Congratulations on winning a Newbery Honor for We Dream of Space. What did you do when you got the call?

EEK: When the call finally came through my spam blocker, Dan had just walked in with Chinese take-out. By the time I got off the phone, I couldn’t eat. My appetite had evaporated into nervous butterflies.

When I got the Newbery call for Hello, Universe, I had no idea what to do with myself, so I cleaned the house. When I got the call for We Dream of Space, I had the same problem. I didn’t know what to do with myself. My body was full of adrenaline, like pins and needles. I paced for a while. Then I challenged Dan to MarioKart. I lost, but it was much more fun than cleaning the house.

MGM: Just for fun, tell us about your hedgehog.

EEK: My hedgehog’s name is Pinball, but we call him “Chuffy” as a nickname because he makes a chuffy sound when you bother him.

We got Chuffy from Hog Wild Hedgehogs in Cherry Hill, New Jersey. When we walked in, the breeder introduced us to three young hedgies who were up for adoption. One of them, Lucy, was incredibly friendly and immediately playful, which is unusual for hedgies.

As I held Lucy, the woman said, “I have others in the back room. I don’t keep them up front because no one wants them.” I asked to see one. She brought me a terrified, brindle-colored hedgehog who was curled in the tightest ball you ever saw. I cradled him in my hands. She explained that no one wanted him because he refused to come out of his ball. “He never wants to come out,” she said. “He loves to run in his wheel, but only if there’s no one around.”

After a while, he stuck his little nose out. He didn’t look anything like Lucy or the others. His snout was slightly crooked, and he had freckles.

I looked at the lady and said, “This is the one I want.” And we took him home. 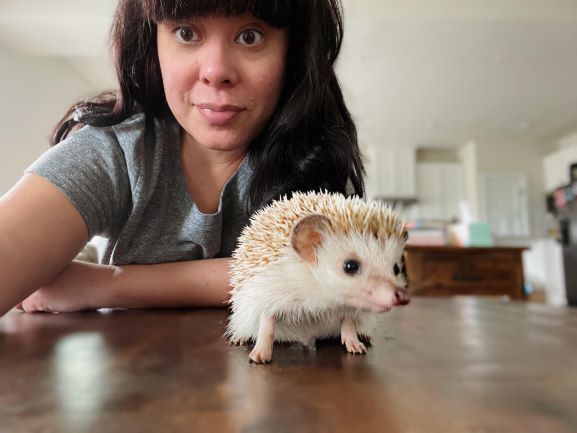