A Chat with Chris Negron about THE LAST SUPER CHEF

A Chat with Chris Negron about THE LAST SUPER CHEF

Middle Grade Mojo loved Chris Negron’s new book The Last Super Chef. We had to know, is he a super chef?

Middle Grade Mojo:  The level of detail in the cooking scenes is remarkable. Are you a super chef yourself, or is it all researched based?

Chris Negron: I should have realized writing The Last Super Chef would mean I’d have to confess I’m not much of a cook over and over again! But yes, here I am again admitting that the cooking scenes come mostly from research, and not direct experience. I would definitely never be called a Super Chef at home. One thing that helped me make sure my research was accurate, though, is I have a writing friend who is a former chef and she helped me confirm a lot of my cooking details. Not just the recipes, but how kitchens work and chefs interact, too. I leaned on her quite a bit when there were gaps in my research.

MGM: The five kid chef contestants prepare some difficult dishes such as Mole Poblano, stuffed squid, Jamaican Run Down, and okonomiyaki. Why did you pick these?

CN: Most of the time the recipes I chose were to fit the conditions of the particular challenge they were used in. Each challenge  had a theme and I was always trying to decide what type of dish would reflect that theme best. In the case of a few you mention, they are some of the dishes that the kids submitted to get access to the contest, and in those cases they had lots of different origins. They might have come from my memory of a particularly great meal I had, or they might’ve been something a friend has told me they cook, or maybe I was trying to honor the particular culture or background a character had by having them cook a dish that represented it. This last one was sometimes tricky, because I never want to stereotype in my work, and there’s a fine line between that and representation. I hope I achieved the latter.

MGM: The Last Super Chef reality television contest was a great concept. What shows did you use as inspiration?

CN: So many. I find myself watching competitive cooking shows all the time! I love seeing people excel at an art – whether it be painting or writing or cooking – that forces them to be creative and express their unique voice and individuality. My favorites along those lines are Top Chef and probably Master Chef, and both of these were clearly in my head as I wrote the Super Chef show.

But I also like the pure sport of some of these shows, as a fan of “regular” sports like football and baseball and such, so I was probably at times thinking of shows like Chopped and maybe even a dash of Beat Bobby Flay, which I also find myself watching often, as well. And my original love in this area was Iron Chef, the one from Japan was really the first competitive cooking show I watched regularly, and it pulled me in deep enough that eventually I wrote a whole book about them!

MGM: Like you, the Super Chef, Lucas Taylor, has Parkinson’s disease. Why did you want to include a character with these symptoms?

CN: So many people are familiar with Michael J. Fox, who has done tremendously positive work that impacts just about every single person who has Parksinson’s. But at the same time, his disease has progressed to a certain point, and his fame I think tends to lead people to believe “this is what Parkinson’s looks like.” As a person with the same disease but in an earlier stage, I wanted to show another side of it. I think I wanted to start a conversation about the things that I found myself thinking about a lot – what I was worried about, what scared me, the types of difficulties I was having with simple activities that end up being confusing or frustrating. Then I got the idea to link these worries in an adult character with the way a kid character would look at the future and be so sure of what they were going to achieve career-wise. Which on one side is so admirable but on the other side, as an adult, you almost want to caution against. So I saw a lot of inherent tension and built-in conflict in these kinds of contrasting outlooks between the characters. And because of that, the concept quickly turned into one that I knew I had a full story to tell about.

MGM: On your website, you mentioned that you played Dungeons & Dragons as a kid. Do you think playing it helped your creativity? Do you still play?

CN: I don’t play any longer but from the Tweets and other anecdotal online evidence I’ve seen, it does seem to be making a come back. Or maybe it never left. Anyway, absolutely, I believe it helped my creativity. I’m always saying that D&D is so much like writing – you create characters and send them on journeys and give them obstacles. In a lot of ways, it’s almost like a training ground for writing books and stories!

MGM: Before writing for kids, you were a successful short story author. What made you decide to write your first MG book Dan Unmasked and now The Last Super Chef? Do you plan to write for other age groups?

CN: I had a critique partner who was reading a lot of my short stories (mostly flash fiction) and after one particular piece she told me I might have a voice for the types of characters that ended up appearing in my middle grade work, and this age group in general. I think maybe in the back of my mind I already thought this was the case, because as soon as I heard this, I jumped at the chance to make the switch. Honestly, I don’t know what was holding me back in the first place!

As far as the two specific books I’ve written in this space, I just tried to be authentic with them by focusing on the things I love or that are really important to me. Dan Unmasked used both baseball and comic books a ton in the story design, and The Last Super Chef of course is all about competitive cooking shows and Parkinson’s disease. So I think this focus on things that are important to me helps kids see I’m being as real with these stories, and with them as readers, as I can be.

Who knows what the future holds? That’s actually a bit of a theme of The Last Super Chef, come to think of it. Seriously, though, I love all kinds of writing and I read widely – from kid lit to adult horror and everything in between. So, sure, I can see writing some sort of YA fantasy series or maybe even writing a novel for adults in the future, but for now I’m having a ton of fun and lots more ideas in the middle grade space, too much to leave soon, anyway.

Thanks, Middle Grade Mojo, for the wonderful questions and for sharing The Last Super Chef with your readers! 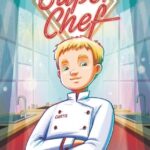